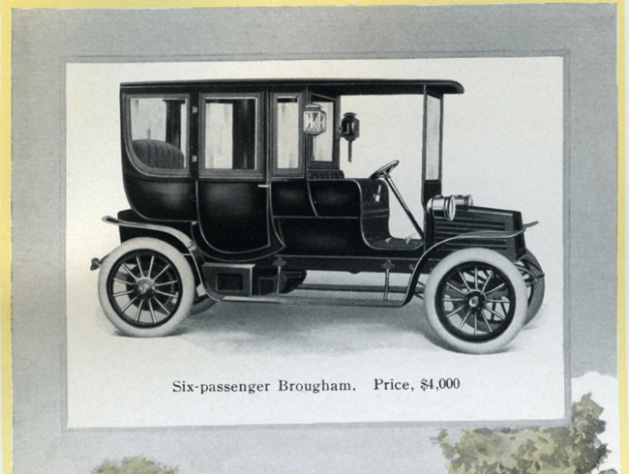 As early as 1899, Nikolaus August Otto, inventor of the four-stroke liquid gas engine, was convinced that electric propulsion would eventually have its hour of glory. His forecast was ultimately confirmed this year. The automobile industry may be on the threshold of a new era 130 years after Gustave Trouvé built his tricycle...

First attempt
Initially, all actors were on an equal footing, whether they had chosen steam, gas, electricity or that foul-smelling liquid, petrol — sold only in chemist shops. All could rejoice at the bright prospects for automobiles. If Trouvé's 1881 tricycle still had pedals (one can never be careful enough…), its counterpart, unveiled a few months later by English engineers William Ayrton and John Perry, didn't have any back-up propulsion system.

In 1893, Frenchman Charles Jeantaud established the first factory producing electric cars only. A real enthusiast, he took part in rallies and races where Count Chasseloup-Laubat and Emile Jenatzy were competing. The latter reached the incredible speed of 105.876 km/h on 1 May 1899 in his "Jamais Contente" electric car. This was the first time someone had driven an automobile over 100 km/h, "a diabolical speed that should be punished with thunder and lightning", commented priests and bishops. For their part doctors thought that eardrums would be ruptured by the noise of these "earthly rockets".

Even if none of these disasters actually happened, the pioneers, scared by this extraordinary performance, backed up. Endurance records replaced speed trials: in 1899 it became possible to drive 140 km without recharging a car; one year later, it was 262 km, and in 1901 a French-produced Krieger managed 307 km. In the US (United States), the Morris & Salom works renovated the New York taxi fleet with their silent and odourless Electrobat.

In Austria, Ferdinand Porsche was revolutionizing electric car production with his Lohner-Porsche Mixte Hybrid, which was the first-ever hybrid vehicle. It had wheel hub-mounted motors directly connected to the axle, making it possible to install electric motors on all wheels of a vehicle. Furthermore, this car could brake from all wheels: if required, one or several electric motors could be cut off to achieve the expected result.

At the turn of the century, several firms were offering all-electric private cars, delivery vans, lorries and buses. At the time, the French postal and telegraphic services and taxi drivers were strong supporters of this technology. In 1898, the Automobile Club de France, which was also behind the first car show, launched a competition opened to all models of taxis. Participants had to drive 60 km every day over 12 days. All 16 electric vehicles that took part finished the competition successfully. The only petrol-engine car, a Panhard & Levassor, was disqualified, being too noisy and giving off a sickening stench.

Across the Atlantic Ocean, electric cars resisted bravely to the onslaught of the oil industry. Between 1907 and 1942 the Detroit Electric company was producing up to 1 000 vehicles a year. It was also in the US that, under pressure from George Baldwin Selden, a lawyer, the idea of imposing a punitive levy on all manufacturers of petrol engine cars was launched.

As early as 1879 Selden had registered a patent for a vehicle as a generic concept based on the so-called Brayton cycle engine (using a piston compressor to heat air, before mixing it with fuel and igniting it in an expansion cylinder). In 1899 the Electric Vehicle Company decided to enter this flourishing market with the objective of establishing a monopoly on the production of taxis powered by batteries. In 1911 Henry Ford won a case by demonstrating that a car could not be powered by the Brayton engine, thus lifting one of the last remaining obstacles to the mass production of cars powered by petrol engines. In spite of this, EVs (electric vehicles) were still very popular. There were around 35 000 of them in 1912. Vehicles were silent and very easy to drive; the electricity lobby had a powerful ally in the person of Thomas Edison. However, the oil producers' camp had strong arguments: oil was cheap and abundant. Automobiles powered by petrol engines, which outperformed EVs in terms of range and speed, eventually took over the personal vehicles' market.

Second try
The situation regarding commercial vehicles was completely different, with EVs ruling the roost in the 1920s. The sale of entire fleets of vehicles was a profitable business in particular as regards laundry vans or vehicles to deliver foodstuffs and drinks or newsprint.

Steinmetz, Ward and Walker were the US vehicle manufacturers of the time. In Germany, the main producers were Bergmann, Hansa-Lloyd and Maschinenfabrik Esslingen...

This is only an extract of the full story written by V. Christian Manz about the seven attempts to introduce mass production electric cars. You can order the complete story, illustrated by a lot of photos, some of them first time publishing, at [email protected]; there are fees for publish the whole story in a magazine, book or Internet. V. Christian Manz can prepare this story special for every one who likes to publish it, on English, German, French or Spanish language, and you can ask for a lot of different photos to illustrate this story. V. Christian Manz is also preparing a book about the complete history of electric and hybrid cars, that could be the best gift for our customers.