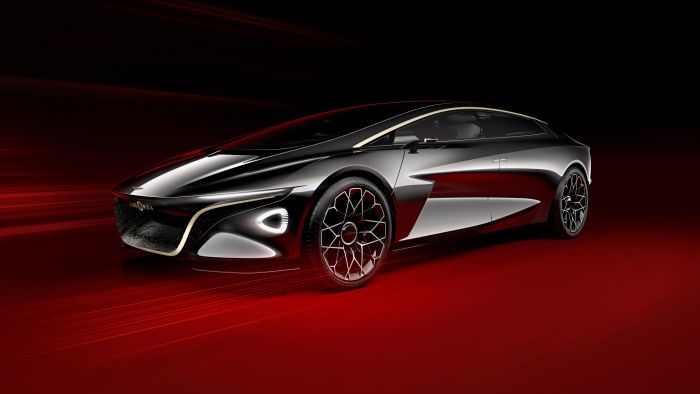 Lagonda aims to be the world’s first zero emission luxury brand. It will confound traditional thinking and take full advantage of the latest advances in electrification and autonomous driving technologies, which amount to the biggest revolution in land-bound transportation since the invention of the car.

The Lagonda ‘Vision Concept’ is a near future study that previews the design language that could potentially be seen in production Lagonda models as soon as 2021. Alongside the new concept, two 40 per cent scale models will be displayed, one coupe concept and one SUV concept, to illustrate how the Lagonda design language could be adapted for the future.

‘The Lagonda Vision Concept is an incredibly bold design statement,’ said Aston Martin EVP and Chief Creative Officer, Marek Reichman. ‘The electrification revolution means there is no longer any need for horse and carriage design, and our new concept shows the scope of design opportunities that open up once you no longer need to provide space for a large power source directly in front of the passenger compartment. In the Lagonda Vision Concept, the batteries occupy the floor of the car. Everything above that line belongs to us.’

Far more than any orthodox design, the Lagonda Vision Concept was designed from the inside out because that is what the architecture allows. With no need to package a vast internal combustion engine, gearbox and transmission, Lagonda’s designers could optimise the interior down to the smallest detail and then build up the exterior of the car around it.

The Lagonda Vision Concept doesn’t have a bonnet because one is not required. But it still needs to travel through the air and to do so as efficiently as possible to preserve battery life, which is why its shape is so sleek and dynamic. ‘The shape of the Lagonda Vision Concept is the result of satisfying a number of different requirements,’ says Reichman. ‘The need to make a bold design statement, to establish Lagonda as a company of the future and to show how technological advancement can help liberate design too.

For the interior Reichman and his team took further delight in defying convention, turning to the most traditional of households for the most visionary thinking. ‘How do you create a cabin that is at once unlike any other, capable of achieving a new level of luxury both in look and feel while staying true to Lagonda’s forward thinking vision? For me there was only one man for the job.’ The work of renowned British craftsman David Snowdon, has fascinated Reichman for years. His ability to marry materials, some very modern, others very established in ways that are never predictable held the key to the interior of the Lagonda Vision Concept.

The Lagonda Vision Concept also anticipates a world with a high level of autonomy. Its design is commensurate with level four autonomous driving, meaning the car is capable of driving itself in all routine circumstances and on all recognisable roads. As a result, the steering wheel can not only move from left to right hand drive according to need, in autonomous mode it can also retract entirely allowing front seat passengers to rotate through 180 degrees to engage in face to face conversation with those in the back. In the meantime, the car will not only have 360-degree awareness of the world around it, but also be fully connected to it, allowing occupants unprecedented access to bespoke concierge services and a level of connectivity and cyber-security few enjoy in their own homes, let along their cars.

The Lagonda Vision Concept has been configured to accept powerful solid state electric batteries enabling it to cover up to 400 real world miles between charges. That’s the distance from Los Angeles to San Francisco, London to Edinburgh or Berlin to Vienna without stopping. The concept has also has been designed to be compatible with the latest wireless conductive charging technology.

Just like the Lagonda Vision Concept, production Lagonda models will not just be supremely spacious, cossetting and exquisitely appointed, but also bold and forward thinking, bristling with creativity and innovation from the way they are designed to the engineering they contain. They will prove that the old conflicts – those between high performance and zero emissions, technological sophistication and the purest luxury are conflicts no more. Lagonda believes the increase in new automotive technologies from efficient electrification to autonomous driving provides a unique opportunity for a new brand bearing one of the greatest names in motoring to rewrite a rulebook that has been allowed to stagnate for too long.

Above all Lagonda will remain faithful to the forward thinking, ever adventurous spirit of Wilbur Gunn, the Anglo-American engineer and entrepreneur who founded Lagonda in a greenhouse at his home in Staines to the west of London in 1904. A man whose talents stretched from opera singing to riverboat building, he named his company after the Lagonda Creek river that ran through the town of Springfield in his native Ohio. His cars were always innovative: for example, the 16/18hp model that won the Moscow to St Petersburg trial in 1910 boasted not only trailing arm rear suspension but a form of monocoque construction, decades before its advantages were realised by the bulk of the world’s car manufacturers. He succeeded because he refused to accept that the current way was the only way. Lagonda went on to become not only one of the most coveted car brands in the world, but among the most versatile too. In its 1930s heyday Lagonda was capable of producing V12-powered limousines fit for royalty, and sports cars strong and quick enough to win Le Mans, which one duly did in 1935. Bought by Aston Martin in 1947, Lagonda continued to innovate, never more so than with the extraordinary Aston Martin Lagonda of the 1980s and 1990s, to this day one of the most audacious and strikingly styled cars ever designed.

Modern Lagonda products will be inspired by these pioneering designs and, like them, steadfast in their focus on the future. ‘We see no limits for Lagonda,’ says Palmer, ‘it will be a brand for the restless, for those who are anything but happy with the status quo. It will produce cars that exploit technology, without being obsessed with it for its own sake. And It will enable Lagonda to redefine the concept of luxury within the automotive and other spheres.

‘The car has been the greatest liberating force humankind has invented, and at the time the journey was as important as the destination. All that has been lost over the last 100 years. Wherever you are in a Lagonda, whatever the journey and whichever seat you occupy, it will re-introduce you to the wonder of travel.’