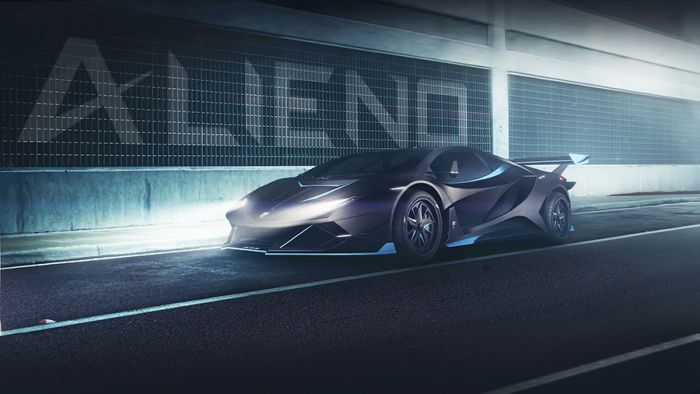 press release:
ALIENO ARCANUM is an all-electric hypercar, which in its top version has power of 5221 hp (3840 kW), 8880 Nm of torque, a top speed of over 488 km/h (303 mph) and a power-to-weight ratio of up to 2.64 hp/kg.The name of the brand is derived from the Italian word "alieno", which means "alien", the name of the model is derived from the Latin word "arcanum", which means "the secret of the secrets".

Ahmed Merchev, founder, CEO & CTO of ALIENO and chief constructor of ARCANUM, shares: "ALIENO ARCANUM is an all-electric hypercar from the future with a brutal technical superiority, which is in the basis of the DNA of the brand ALIENO. This our first debut model, expresses clearly the mission of ALIENO to create hypercars with alien technologies from the future into the present. ALIENO ARCANUM does not follow the rules, but it creates new ones, providing an extremely exciting driving experience and enjoyment. By this, it touches not only the senses, but also your soul. Moreover, considering the intelligence of the car achieved through the ALIENO artificial intelligence systems built into it, it is like having at disposal your own alien, being your guide, your guardian and who teaches you how to reach its full potential, while driving it."

Chassis & Body:
ALIENO ARCANUM has an innovative ALIENO chassis, built entirely from pre-preg carbon-fiber and honeycomb core and consists of carbon-fiber monocoque with carbon-fiber front and rear subframes. The bottom is reinforced with Kevlar. There are structural reinforcements and crumple/deformation zones for front, rear, side, upper and lower impacts, as well as front and rear carbon-fiber crash structures. In addition to its low weight, safety and strength, the chassis also features maximum torsional rigidity and allows the construction of a lightweight and aerodynamic shape of the exterior. All core nodes (elements) of the car are robotic and are regulated electronically.

Aerodynamics:
ALIENO ARCANUM has innovative ALIENO active, robotic and adaptive aerodynamics, with a lot of active robotic elements, flaps and mechanisms, part of which are visible in the exterior design, while others are inside of the car. This innovative technology, allows for an improved movement and channeling of the airflow around the car, with main purpose of increasing the stability and the drag of the car to the road. Of course, depending on the need, this drag can be easily and precisely adjusted, for achieving higher speed.

Instead of one big electric motor, several smaller ones are used, that are individually controlled (each from its own motor controller) according to the needs, which significantly increases the possibilities and efficiency of the car in all its modes and speeds and the efficiency reaches up to 97%.

The powertrain has 3 different basic drive modes (Street, Track and Race), which are activated depending on the desired use of the car and the desired dynamic characteristics preferred by the driver. In any of these modes, through adjustments of the load on the respective front and rear electric motors (the electric motors connected to the front wheels and the electric motors connected to the rear wheels), there is the possibility to precisely change the distribution of power between the front wheels and the rear wheels from 0% to 100% and from 100% to 0% respectively. In any of these combinations, the control system has the possibility to provide energy efficient drive of the car.

Apart from that, innovative ALIENO real-time system for vector control of the torque of each wheel separately has been implemented in the control system, thanks to the individual and direct drive through electric motors of each wheel (from 3 to 6 electric motors per wheel) and the lack of mechanical reducers containing heavy and bulky mechanical parts with friction parts.

The supercapacitors, accumulate energy from the electric motors when the car is braking and they give it back to the powertrain when needed, mainly in the peak dynamic modes - when starting, accelerating and braking the car.

The maximum voltage of the battery is 800V, as it is designed to provide huge power, where in the SBP variant it can reach up to 11.7 MW continuous power and 23.4 MW peak power.

Furthermore, the battery is capable of absorbing huge power during charging and regenerative braking, reaching up to 2.7 MW in the SBP variant.

The battery consists of few ALIENO Plug & Play interchangeable modules, as the car automatically adjusts its parameters according to the number and the status of the installed modules. It is possible to install different number of modules, with the idea of providing different capacities between the three base variants of the battery. In this case, according to the desired number of battery modules, "the alien” guides the user, where exactly he should place the modules, in order to achieve maximum stability and lowest center of gravity of the car, and of course achieving optimal weight distribution between the front and rear axles.

Dimensions, Weight and Power-to-weight ratio:
ALIENO ARCANUM has overall length of 5240 mm, overall width of 2180 mm (without and with the ALIENO aerodynamic side digital mirrors) and wheelbase of 3100 mm.

The ground clearance of the car, is fully electrically-adjustable, as on the front and on the center of the car can be adjusted from 60 mm to 90 mm in Race mode, from 80 mm to 120 mm in Track mode and from 110 mm to 160 mm in Street mode, while at the rear it is with 40 mm larger.