The german company nanoFlowcell based in Liechtenstein continues with the […] 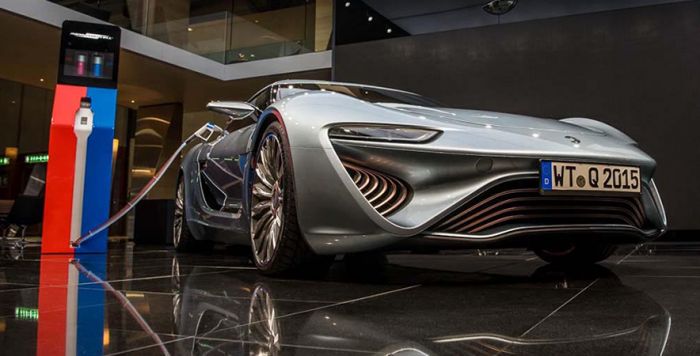 Question: recharge or refuel? A crossroads for electric mobility

Share http://www.nanoflowcell.com
The german company nanoFlowcell based in Liechtenstein continues with the development of its flowcell batteries. These batteries doesn't need a charging station or to be pluged in a home socket, than to be refueled by the biION electrolyte-liquid, which can theoretically be manufactured anywhere in the world. Based on positive and negatively charged electrolytes which react inside the nanoFlowcell and produce electricity. A clean liquide easy to distribute around the world and easy to fill into the two fuel tanks of the car.

Manufacturers who invest in the development of conventional electric cars are acting out of expedient optimism. For them, electric mobility is far from a foregone conclusion. So far, no manufacturer has managed to get to grips with the technical difficulties associated with battery-powered vehicles, such as lengthy charging times and insufficient range. And almost nowhere in the world is there a suitable infrastructure of electric charging stations. Even if you find a charging station, it is far from certain that your own car's charging system is compatible with it. Although billions in taxpayers' money are earmarked for the expansion of the electric infrastructure, governments are incredibly sluggish when it comes to implementation. State-sponsored purchase incentives for electric cars are thus more symbolic than pragmatic.

Isn't there another way?

Electric vehicles driven by nanoFlowcell operate just like conventional electric vehicles and, at the same time, like vehicles with traditional internal combustion engines. How so? The fundamental concept of an electric vehicle is retained, only the energy source changes. Instead of a bulky and, at an average of 700 kg, incredibly heavy lithium-ion battery pack, we have the shoebox-sized nanoFlowcell and two fuel tanks containing around 150 litres of bi-ION electrolyte liquid. You see, just like a vehicle with a regular combustion engine, the nanoFlowcell needs fuel. In this case, it takes the form of electrolytes - positive and negatively charged electrolyte liquids that react inside the nanoFlowcell and release electricity. In contrast to conventional fuels like petrol, diesel or gas, the bi-ION electrolyte liquid is neither explosive nor flammable, and is harmful neither to health nor the environment. The spent liquid is atomised while driving and does not represent a risk to health or the environment. The tank of a nanoFlowcell electric vehicle empties while driving, and can be refilled in similar fashion to a vehicle with an internal combustion engine.

In contrast to fossil fuels, the bi-ION electrolyte solution is not extracted and refined in just a few countries, but can theoretically be manufactured anywhere in the world (given the appropriate production equipment) more-or-less on the doorstep. Because of their chemical properties, bi-ION electrolytes are not hazardous materials. Manufacture, transport and distribution can therefore be achieved without complicated equipment. bi-ION can be delivered in tankers from the local production location to the existing fuel-station network.

From a cost standpoint, the two different electric mobility scenarios are as follows:

Shorter charging times are possible with a commercial charging station - from one to 2.5 hours at 60 kW or from 24 minutes to one hour at 150 kW (Tesla). However, these high-performance charging stations cost between € 25,000 and €50,000. Another consideration is that modern lithium-ion batteries cannot handle such high charging currents without incurring damage leading to a drastic shortening of their lifespan. All electric mobility scenarios currently prefer the use of rapid charging stations to the detriment of longer battery life. Even theoreticians know that consumers in favour of electric mobility will not be convinced if told they will have to plan in an additional 14 hours of charging time to cover a four-hour drive of 400 kilometres.

In contrast to the charging infrastructure for lithium-ion batteries, the refuelling infrastructure for bi-ION is considerably easier, faster and more cost effective to build; it adds up to just a fraction of the infrastructure costs of current electric mobility scenarios. Fuel stations would have to retrofit individual fuel pumps, because fuelling nanoFlowcell-powered electric vehicles requires a pump gun with a double hose to enable simultaneous filling with two liquids - one positively and one negatively charged electrolyte liquid. The bi-ION storage tanks themselves could replace the individual underground diesel or petrol tanks, or even be positioned above ground. Spread across the number of nanoFlowcell vehicles that can be served each day by one bi-ION fuel pump, the investment for retrofitting the fuel pumps adds up to just a few euro cents. The investment required to build a new fuel station for bi-ION only would be similar to that fora conventional fuel station.

Comprehensive distribution of nanoFlowcell-based electric mobility does not necessitate buying incentives, tax-financed state investment or greater compromises on the part of consumers. Technologies like nanoFlowcell require only a rethink by industry and politics. Although the current approach to electric mobility has already swallowed billions, consideration must finally also be given to the existing - and highly promising - alternatives. The frenetic but non-strategic activity evident in many places loses sight of important facts, talks up others and is manoeuvring electric mobility further and further up a dead end.
You can support me and my articles by donating the amount you want.
I will be very grateful.