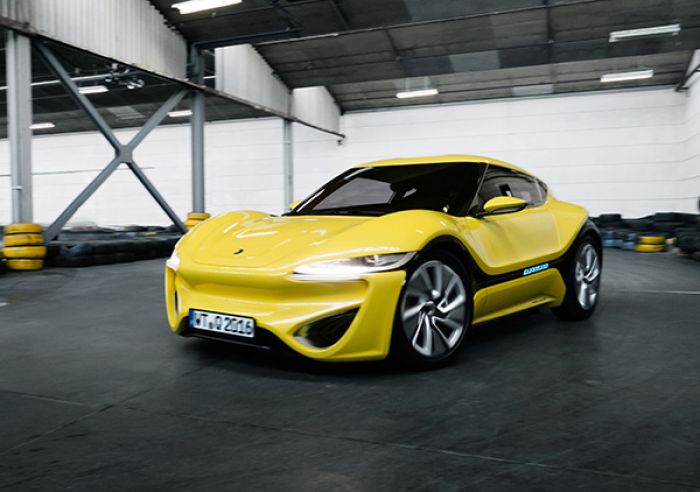 In the field of electric mobility, there was previously no alternative to high-voltage traction systems. However, the nanoFlowcell low-voltage drive system enables a high-performance powertrain to operate at low voltages and shows that electric vehicles can be powerful, cost-efficient and safe at the same time.

Although still a rare sight on the roads, electric vehicles are nevertheless very much part of the model mix for virtually every car maker. Despite differences in design and in their respective brand images, all current electric vehicles still have one thing in common - a high-voltage traction system.

The electrical systems for vehicle and drive alike all operate on high voltage (HV) or with a combination of high-voltage traction system and low-voltage vehicle electric system. The electrified drivetrain has thus seen high-voltage and high-power electronics establish its place in vehicle technology.

To put it another way: up to 600 volts now flow through the wiring looms in modern electric vehicles. And it is precisely this fact that makes electric cars such a spectre of fear for many drivers. Negative headlines like those on the up-and-coming Tesla Model S foment scepticism concerning an otherwise advanced automotive drive technology.

The times when hobbyists tinkered with their cars in rented garage space are well and truly over with the advent of the electric car. Back in the day, you might have burnt a finger on a hot engine, but direct contact with up to 600 volts - 2.5 times that from a domestic outlet - means danger to life and limb. Maintenance work on the high-voltage system of an electric vehicle is thus the exclusive preserve of trained workshop experts, specifically schooled in the dangers of working on high-voltage vehicles.

But it's not just in-house personnel who need training. Car makers and suppliers are working with the fire and emergency services to develop new safety concepts that take into account the specifics of electric vehicles with high-voltage systems in the event of an accident. However, HV safety starts even at the production stage. To avoid a serious accident developing into a tragedy for occupants and the emergency services, increased structural safety standards are intended to provide comprehensive contact protection and flash barriers to guard against the HV system in an electric vehicle. But increased safety precautions for HV electric vehicles cannot be achieved without additional costs.

To integrate high-performance electric drive units with potentially dangerous levels of current and voltage into an existing vehicle architecture and still guarantee safety in all driving situations - from normal operation through incidental repairs to possible accidents - far-reaching structural changes are necessary relative to comparable petrol or diesel-driven models.

Individual components, primarily those such as specialised high-voltage cables and wires, are made by hand and subjected to multiple inspections in order to preclude to the greatest extent possible production errors that could have potentially fatal consequences. Cables are also clad with Kevlar to protect them from breaking in the event of an impact.

So are electric cars expensive because their high-voltage components require specialist protection to prevent occupants from being exposed to electricity should an accident or malfunction occur? Yes, but not only because of that. The lithium-ion battery remains the single most expensive component in conventional electric vehicles with any kind of usable range.

The additional costs for electric vehicles are arguably up for debate. However, there should be no compromise when it comes to safety - even if the electrification of the automobile still seems so desirable from a socio-ecological standpoint.

With low-voltage systems that operate at just 48 volts instead of up to 600 volts, car makers would be able to work without many of the currently necessary HV safety precautions and their associated disadvantages. And if low-voltage technology were to be paired with nanoFlowcell technology, an electric car would not need to be any more expensive than a conventional vehicle with an internal combustion engine.

nanoFlowcell Holdings has developed the nanoFlowcell low-voltage drive specifically to avoid those hurdles that stand in the way of widespread market introduction of electric vehicles with high-voltage technology - safety and cost.

The 48 V nanoFlowcell low-voltage drive is compatible with existing low-voltage vehicle electrical systems and suitable not only for small and compact electric vehicles, but also for high-performance sports cars. The nanoFlowcell low-voltage technology is in no way inferior to the high-voltage technology in today's generation of e-vehicles when it comes to performance, but is considerably ahead of it in terms of safety and costs because increased performance requirements do not push up system output and thus the electricity needed over 48 V. This level of electrical tension is not dangerous to the human body as alternating current does not become life threatening until upwards of 50 V and direct current until above 120 V. (>)

In the predevelopment of the QUANTiNO, Nunzio La Vecchia's team defined the technical requirements of a nanoFlowcell-driven low-voltage electric vehicle and conceived not only the architecture for the control units and HMI (human-machine interface), but also the complete low-voltage traction and vehicle electrical systems.

"With QUANTiNO, we have fundamentally rethought the whole notion of electric drive. This is reflected primarily in the QUANTiNO's system architecture and the configuration of its electrical and electronic systems," explains Nunzio La Vecchia, Chief Technology Officer for the nanoFlowcell Group. "Our engineering expertise in building prototype electric vehicles and, in particular, our know-how in power electronics and software facilitated a holistic development approach in adapting the vehicle electrical and traction systems. A further element that was incredibly important for the low-voltage architecture we were working on was the development of new LV components and a new wiring harness. We were able to achieve highly beneficial solutions to the most commonly raised criticisms such as installation space and packaging - i.e. dimensioning, weight and positioning of the components and wiring. With the QUANTiNO, which is powered by our in-house nanoFlowcell low-voltage system, we were actually the first company to bring to production maturity a low-voltage electric vehicle suitable for everyday use. One that offers unbeatable benefits in terms of development and production, as well as user aspects."

Another special feature of the nanoFlowcell low-voltage drive is the electric energy storage in the form of bi-ION electrolytes. In contrast to current high-voltage electric vehicles, which are dependent on the packaging of their high-energy or high-power cells based on lithium-ion (the higher the power, the bigger, heavier and more expensive the battery), the QUANTiNO is not faced with any restrictions on the part of energy storage. The nanoFlowcell (the energy converter) is barely larger than a shoebox and the bi-ION electrolytes (the energy carrier) are stored in a regular tank. The latter is bound by no special constraints as the electrolytes are neither explosive nor flammable, nor are they in any way harmful to health or the environment. Ultimately, it is the flow cell that decides the level of energy flow (put simply - the faster the car is driving, the more electrolyte flows through the cell), and the size of the tank and therefore the electrolyte available that decides the range of the electric vehicle. The bi-ION electrolyte liquid is vaporised after use and released as an environmentally neutral "exhaust" similar to water-vapour emissions from a hydrogen-fuelled vehicle. Once empty, the tank is simply refilled.

Designers and vehicle development engineers are presented with wide-ranging opportunities for using the new freedom offered by the nanoFlowcell low-voltage system for the development of forward-looking, cost-effective vehicle concepts. Consumers will also be pleased that they don't have to drive with lithium-ion batteries, which have a tendency towards thermal collapse, but to have instead the nanoFlowcell low-voltage drive, which is not only exceptionally safe to use, but also an extremely low-maintenance and cost-efficient drive system.
TagsNanoFlowcell